You are here: Home1 / Uncategorised2 / ErgoKneeler: The inventor’s story

I’m frequently asked how I went about inventing and developing the ErgoKneeler™ (or EK™ as it affectionately known) and I have to say that there was no instantaneous ‘eureka moment’. As a physio and moving and handling facilitator I had been revisiting the issues around low working postures for most of my professional life and had often given thought to the possibility of creating a piece of equipment that could make life better for staff. Something that would improve spinal posture, reduce musculoskeletal stressing and most importantly, somehow reduce time spent in a static posture.

Using my knowledge as a physio a design idea gradually evolved and, from simple foam blocks, I devised a working model that could demonstrate the ergonomic and biomechanical principles behind that design. It worked, it actually worked and to the amusement of my long suffering husband, I spent considerable time trying the model out in all sorts of low working situations. This stage hung around for quite a while but as I approached semi retirement I began to think that if there ever was going to be a time to do something about it, then this was it! 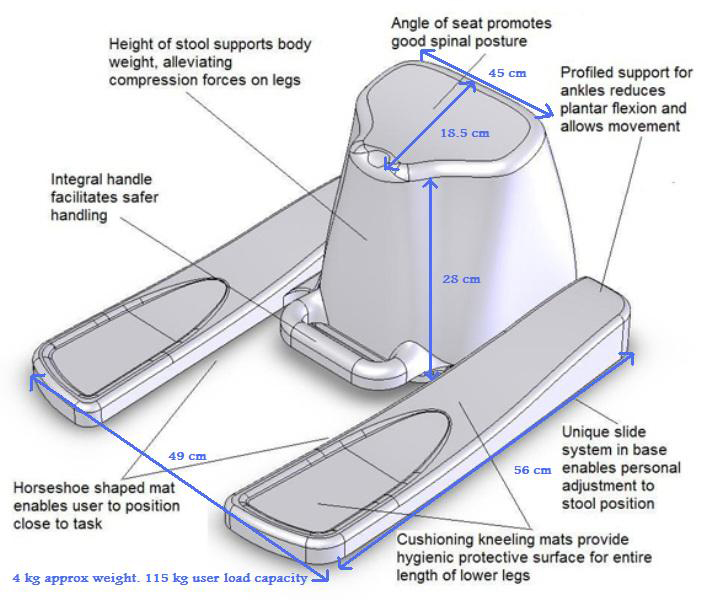 From the start I was aware that I needed to protect my intellectual property rights as, if the idea did eventually develop into a market product, I would want to register the design in my own name. A little bit of research revealed that I had to prevent the idea from becoming generally known about ie. ‘within the public domain’ and the way to achieve this was by asking everyone who became involved in its development to sign a ‘Non-Disclosure Confidentiality Agreement’. This sounds a bit scary but is essential for anyone wishing to patent or register their intellectual property and I found people do understand when it is explained to them.

It was also imperative that I researched whether or not someone else had come up with the idea before me and had already registered it in their name, which thankfully they hadn’t. All this took a huge amount of work, time and money, with days and days spent trawling the websites and involving the necessary but expensive services of a Patent Attorney!

With this sorted, then with the help of friends (yes, they all kindly signed the essential NDCA) I undertook a small field trial with the working model, the results of which gave me the confidence to move forwards. However, I knew I couldn’t afford, nor did I possess the ‘know- how’ to develop the idea all by myself – so how was I going to do it?

I had known Steve Clark from Spectrum Healthcare UK (Ltd) for several years and had always found both Steve and the company straight forward and comfortable to work with. So, in a nut shell, I took my courage in my hands and approached them about my new product idea. With the NDCA duly signed, I presented the whole concept to them – THEY LIKED IT!! So much so that Steve contacted the Bioscience and Healthcare iNet at Medilink East Midlands who thought the idea excellent, offered to support its development and signposted Spectrum and I to the Design Unit at De Montfort University, Leicester – WOW! The Design Unit also felt the idea very innovative and offered to take on the research and development work necessary to bring the idea from my head to a marketable product – double WOW!

So that was how I and the rest of the development team for the EK™ came together. You can imagine how thrilled I felt – my idea had actually taken root in the fertile minds of the very people who could make it grow – fantastic. I then spent the next two and a half years ricocheting up and down the M1 as the team undertook the research and design work that led to the creation of the CAD models, developed, manufactured and trialled three different prototypes, organised and collated two field trials, carried out several evaluation/consultation sessions with professional peers, sourced and trialled four different manufacturers, wrote, rewrote and sought peer review of Guidelines for Use and tackled and resolved dozens of unforeseen issues. The team eventually achieved its goal in late June 2011 when the ErgoKneeler™, with Registered Design status in my name, was successfully launched onto the market – JUBILATION and a big sigh of relief all round!

Spectrum is the sole marketing agent and I am delighted to say that sales in the UK are gaining momentum and we even have interest from Ireland, Australia and New Zealand. The great thing is that organisations who initially bought one EK™ have gone on to evaluate it in their work place and many are now coming back and buying multiple units for their staff – recommendation indeed!